I created new bookmarks to share with Sounds who visit Echoland. Follow this blog by email (tab on the right) for news of my coming giveaways. And more Echo swag coming soon!

News: I just added a SWAG GIVEAWAY, with 4 beautiful items open for grabs: a dartboard, a clock, a lamp and a puzzle. Visit the giveaway tab on this blog and enter for free.

Reviewed By Liz Konkel for Readers’ Favorite
The Crystilleries of Echoland by Dew Pellucid begins as thousands of children disappear with only one child ever having returned. Will Cleary returned with a falcon and a wolf to watch over him, but his twin sister remained behind in Echoland, another world filled with reflections of us called Echoes. All Will's parents have done since he came back is to plot ways to find his sister, often barely acknowledging his existence. When his faithful protectors reveal a shocking truth, Will is pulled back into the world he doesn't remember on a journey to find his sister. Along the way, he turns to new allies for help as he's swept into the discovery of the missing children, into solving a murder, and into helping the rightful heir onto the throne. Dew Pellucid blends together an exciting fantasy adventure with a murder mystery in a journey of growing up. Echoland is a unique and ghost-like mirror world with transparent trees and people. Everything is described in ghostly detail, but often reflects our own world with a mix of absurd and ominous twists. Every little detail of this world matters in the larger picture of the story. It's a wondrous and yet dangerous place that pulls you along for the journey. The stakes are high with Will's life constantly at risk, but his journey through this world teaches him bravery and true friendship. Will's friendships are the strongest connections he has as both of his parents seem to shrug him off whenever he's around, too occupied with trying to find his sister to really see him. Dea and Damian are more than just his pets, they're his protectors, the ones watching over him since he returned home, and the ones that lead him back to Echoland. His life at the beginning is only briefly touched upon, but it's clear he's alone except for his pets so, when he makes friends in Echoland, it further illustrates how important that bond is for him. His new friends liven the story up while also giving a sense of heart to the tale and providing him with people he wants to protect. Peter is his first real friend in this world. He's a magician who starts off a bit suspicious, but quickly turns into Will's strongest supporter. He has a mischievous side to him, but he's also loyal and compassionate. Animals play a large role throughout the story as Will's pets are the catalyst for his return to Echoland, but it's the Echo Wolf he bonds with later that fills a certain void. Peter has a strong attachment to his dog Poudini, who has an emotional place in the story. Fun nods to common things in our world maintain a lot of the humor throughout as Echoland has Crystalmas instead of Christmas and Poudini is a fun play on the famous magician. The illustrations are stunning and capture important moments throughout with an array of blue hues that capture the lucent essence of the world. The Crystilleries of Echoland is a hero's journey in a story of strength and courage with a dazzling array of illustrations.
at March 19, 2018 No comments:

The Story Behind the Story

In 2006, I sat on the floor of my living room and started imagining a see-through realm. I took notes of all my bad ideas. And my dog ate my pens.

Over the next years, I wove a story about a twelve-year-old boy whose life is torn apart by see-through beings from another realm. And slowly the story of Echoland took shape.

And though it all started with a philosophical idea, it ended up being a fun story. So now, I'm going to write about the philosophical part. And if you just yawned so much that you almost swallowed your screen (or phone, or whatever), I suggest you move to the ILLUSTRATIONS tab of this blog. Or start reading your copy of THE CRYSTLLERIES OF ECHOLAND.

The philosophical idea behind the story....

Plato was a Greek philosopher. He tried to answer a question that troubled the thinkers of the past. When we look at a dog, any dog, we know that we're looking at a dog (not a cat.) But every dog is a little different. I mean, my Pomeranian doesn't look anything like my neighbors Mastiff. Well...not often.

Plato invented another plain...a place where the idea of a perfect dog actually exists. The dogs we see here are a reflection, a less than perfect copy. And every dog we see here is less perfect in a different way. Which is why they all look a little different.

The best story I heard from readers was Stone & Journey's. The two twins have the most wonderful mom. Lisa would read to them at night, and this encouraged the 11 year olds to start reading more. And the lovely thing was that Stoney & Journey would use a blow dryer to melt a hole in an imaginary frozen pond, so they could get to Echoland.

Another story I love comes from Spain. My nephew speaks Spanish, Catalan, Hebrew, French and English. He isn't even a teenager yet. So he read the story in English, which I found to be amazing!

Finally, my favorite review of the story came from a 4th grader on Amazon's kids' corner. And he read the book in just a few days.

And finally final, here's my real-life kid, who was the inspiration for Poudini in the story. 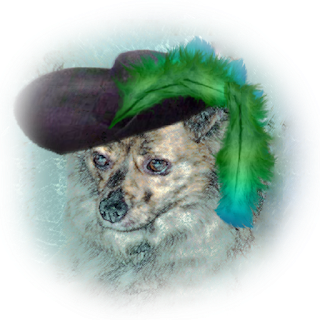 Book Trailer: The Crystilleries of Echoland

The Crystilleries of Echoland 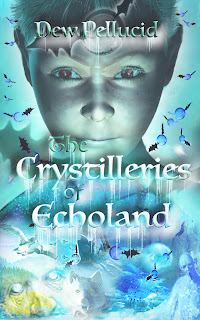 Thousands of children disappear from our world. No one sees the kidnapping; or if they do, they forget. But one toddler returns after a week, riding a wolf, with a falcon circling over him.

That boy is Will Cleary.

Will tries to live a normal life. But his twin sister is still missing, and their parents never stop searching for her. Then just before his thirteenth birthday, Will's pets reveal a secret to him. (Though how it happens will remain a secret, until you read the book.)

A hidden world lies beneath our feet, a land filled with see-through trees and lucent people. They call us Sounds, and they are our Echoes; for each one of them is a reflection of one of us. It is a sparkling, beautiful place, a winter wonderland. But there is evil there, a terrible law, the Law of Death.

When a Sound dies in our world, his Echo is executed in Echoland. And there are those who reverse the order of things, to achieve their wicked ends. They hunt the Sound of the Echo they want to kill. Then the first death leads to the second as surely as lightning leads to thunder.

Is that what happened to the missing children in Will's realm? Did someone want to murder their Echoes? Or are these Sounds still alive, trapped somewhere in Echoland?

Will tries to escape the frightening answer. But dangers sweep him into that magical, see-through land. And there, in a fortress filled with castaway children, a two-hundred-year-old riddle lies buried. The most important boy in Echoland will help Will solve it, with a handful of other kids. For the fate of Echoland, and of the Sound realm, depends on the answer.

An answer hidden in an ancient book…
Deep in a frozen lake of gems…
Beyond a buried door…
At the foot of the greatest Crystillery of all.

But many men and monsters, crystal balls and spying eyes, will try to stop the brave children from changing Echoland forever!
at March 15, 2018 No comments: 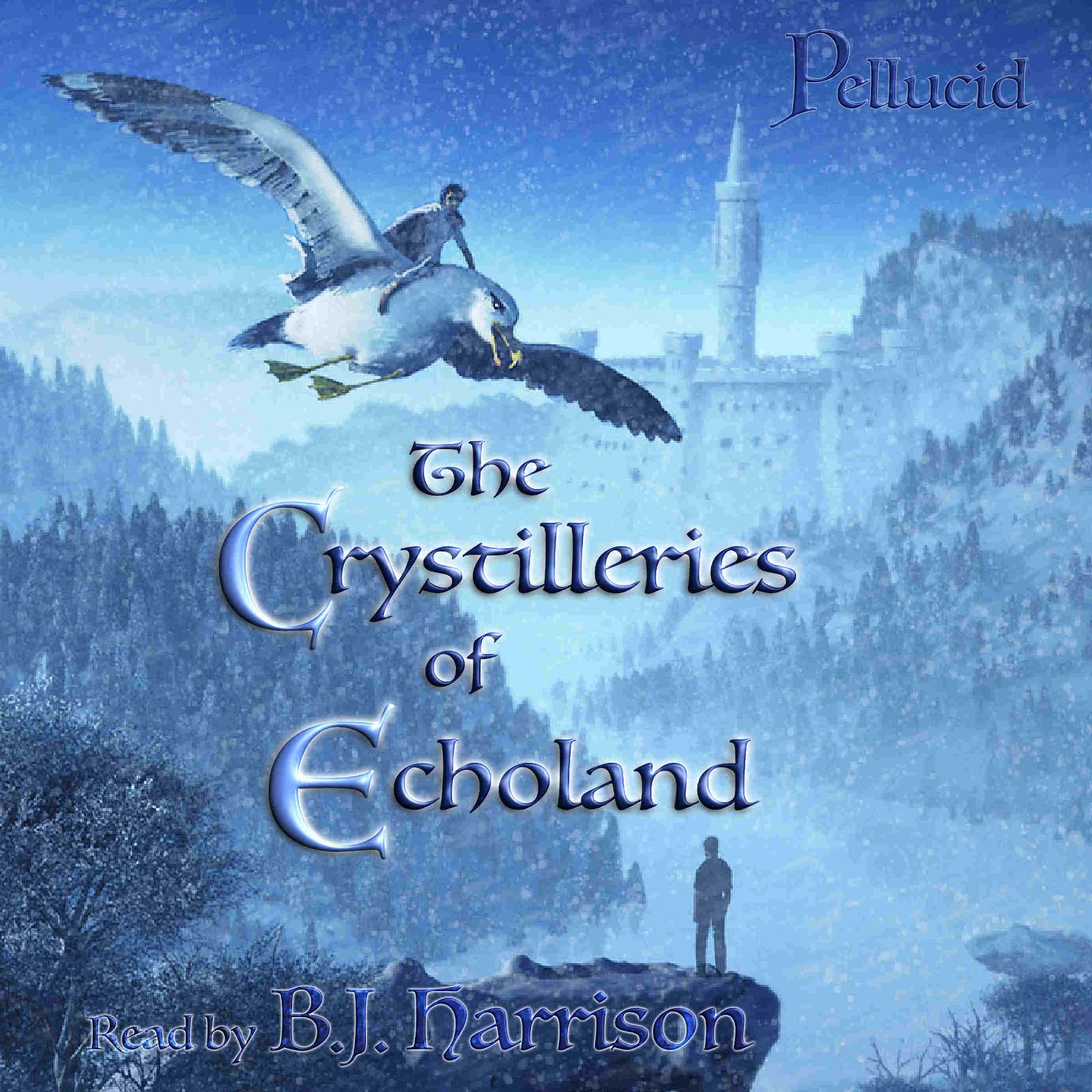